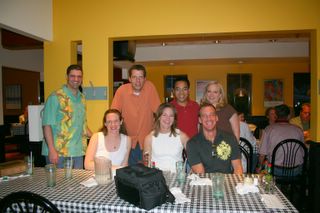 Dinner Friday night involved five former Marquette University Television folks. Of the five of us, only Grant (in the dark green) still works in the field.

We had the best time catching up and reminiscing about old times. I had written about them earlier in the week, but now I'm even more convinced that really good college friends are a lot like family. We picked back up as if we were just back from summer vacation. I still can't believe it has been ten years. I'm sure the two spouses (Cameron and Shannon) who came out got a little more insight into the life of an MU broadcast student.

After at Edwardo's, we ended up at a couple of the bars on campus. They were kind of dead as school is still out, but at least we didn't have to talk too loud. Met up with Dave (pictured two posts from this one) who is also still doing TV work as an editor in Hollywood. Actually ran into the wife of another of my college roommates.
Posted by Edgar at 7/31/2005 04:55:00 PM

Jim and I are enjoying these MU pics -- but just can't remember anybody's last names - other than Catherine and Nikki. Can you help? You can reply just to me if you'd rather protect privacy -- and is Cameron Nikki's husband?