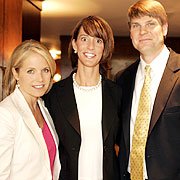 I'm just catching the end of this... had to mow the lawn.

Yeah, I realize just by having it on, I'm contributing to the stupidity, but I did want to comment on this.

This whole fiasco is definitely one more sign of an apocalypse. Shannon and I were talking about this last night...

Basically this woman who was arrested three times for shoplifting, can't bring herself to marry some guy, so she takes off, then fakes as if she was abducted.She was sentenced to probation and community service, was fined $2,550 and is repaying the city of Duluth, Ga., $13,250 in overtime costs related to the search for her.

For this she has been able to work out some kind of deal (I won't get into the whole paying for an interview issue) for $500,000.

I don't mean to sound like I don't have compassion, but if Shannon had thought of this, minus the taxes and the fines she would have had to repay, we still could have paid for our wedding, a honeymoon (we couldn't afford at the time) and our house. I'm kidding of course...

If this woman is as geniuine as she's trying to sell herself to Katie and the rest of America, she would give all of this money to charity... to people who need and deserve it.