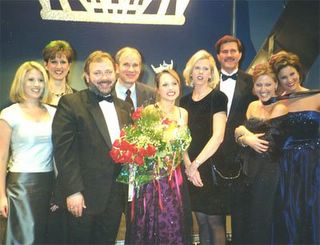 That's Amanda second from the right.

Don't have a decent picture (this is from Miss HOI 2000), but Happy Birthday to WHOI news director Amanda Wozniak. As she's not on aire, she doesn't have a bio on their website, but she was honored last year as one of the Peoria area's 40 Leaders Under 40. Here's what they had to say:

Amanda Wozniak is news director at WHOI-TV, where she's responsible for the day-to-day news operations at the television station and her staff of 30. She's also responsible for special projects including "Kids Count," "One Class at a Time," "Speedcam," and "Every Vote Counts"-plus sweeps planning, election coverage, and other projects. Among her accomplishments, Wozniak was named news director at age 25. She's helped her station give teachers in the Heart of Illinois more than $10,000 in grants as part of its "One Class at a Time" campaign; received recognition for making roads safer in September with an American Red Cross Heartland Hero Award for its ongoing "Speedcam" series; gave out more than 15,000 free DNA Child ID kits; and helped launch the "Kids Helping Kids" initiative. Her community involvement includes work with Neighborhood House, American Red Cross Safe Communities Committee, Peoria Area Safe Kids Coalition Board, and the Woman's Advisory Council.