And You Thought He Was Gonna Ga Ga Over Katie Holmes 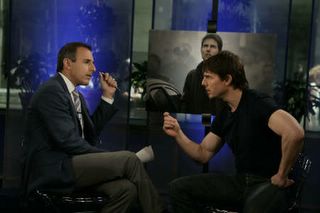 Matt and Tom square off.

I didn't see it, but I heard replay and commentary on the Markley and Luciano show on the way home. Good stuff. I've linked to the transcript from the Drudge Report.

Two things come to mind. On the one hand, the heads of the studio putting out "War of the Worlds" must be pulling their hair out. When they have stars go out as a movie is being released, they want little controversy and lots of pub. Well they're getting half of that.

But on the other hand, isn't it refreshing that someone really just says what they think about what they believe? I'm not taking a side, I'm just saying how tired I am of the canned interviews and canned answers. Maybe they were both pretty ticked off afterwards, but it was compelling.