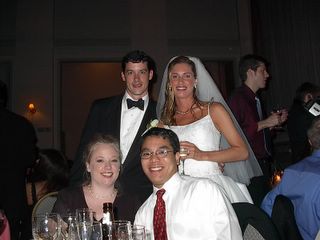 Us with Tim and Tracy

My good friend Tracy is a producer in Chicago now. So it would make sense that Shannon and I thought the wedding was very well "produced." They did the first dance and cut the cake just after everyone was seated. This is something we really liked and have suggested to others.

Tim and Tracy met through a mutual friend which is fairly common, but then they kept running into each other at other restaurants, outings etc. She honestly wasn't really that interested because he was moving to Boston for a job. But, after bumping into each other too many times randomly they decided to go on a date. Boston lasted a couple of months until he moved back to Chicago.