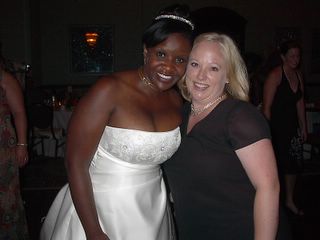 This was another blast of a wedding, but one frustrating thing... our camera kept dying each time we tried to take a picture with Ryan and Darcy. We got this one with Shannon and Darcy, but that was it.

I swear Ryan and Darcy could work for the CIA. Shannon and I started dating in the fall of 97, but Ryan and Darcy actually had been dating for several months before us. And nobody knew. Nobody. If you've worked in a newsroom, you'll know how crazy that is. Sheesh, Ryan and I lived together. But the truth is everybody is in each other's stuff. Heck, Mark predicted that Shannon and I would start dating before we started dating. It's in his journal.

Shannon and Darcy bonded towards the end of 97 and the first half of 98. That's because Ryan and I both left them here... me to Monterey and Ryan to Colorado Springs for jobs. As Shannon likes to say, they were at the WMBD Christmas party together "boo-hoing." But all worked out... Ryan couldn't stay away and a few months later he was back in town. They've since moved on to Memphis and have been blessed with a beautiful girl.
Posted by Edgar at 2/13/2005 09:51:00 PM