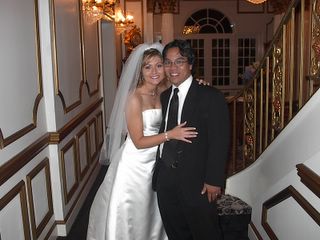 Because I had work in New Jersey first thing Monday morning, I was able to attend Aimee's wedding which took place that Sunday. Shannon stayed home as we couldn't figure out what to do with the kids and it was going to be such a quick trip. I had to leave the reception early and we were unable to find the groom for a picture, so it's just me and Aimee here (BTW check out how long my hair was). Chris Curtis and I represented WMBD "back in the day."

I had actually met Rob the year before. I was in New York for a conference... he and Aimee took me out on the town. In getting to talk to him some that night, I got the sense that he was the one.

Aimee replied to my e-mail this weekend and has been gracious enough to share the story of how they met:

Rob and I met in the most unlikely of places... outside the Morris County Jail
in New Jersey. We were there for a "perp walk." That's when they walk the bad
guy out in handcuffs and stuff him into a police car. Rob was a cameraman for
channel 11, I was a reporter for channel 2. We got to talking, then things got
crazy and we were wisked off in different directions. Days later, I kept
thinking about him, so I called up a mutual friend at my station and told her to
feel out the situation. It wasn't for another six months that we wound up at the
same party and he asked me out.