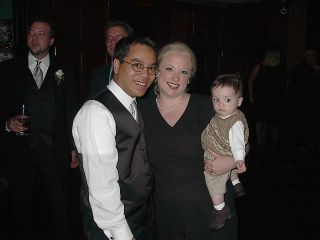 So I was telling the Steve and Tanya story to Jonathan before our soccer game on Thursday... but as it turns out, it seems Jonathan is in part responsible for my marriage.

Before she was, my wife she was Shannon Tebben. And before she was a TV reporter, she was a newspaper reporter, covering varous beats including Tazewell County Board for the Pekin Daily Times.

Also covering that board was a young, WMBD radio reporter who was going by the name John Render, now better known to local listeners as Jonathan Ahl. In the spring of 1997, Jim Gee was moving from assignment editor to producer at WMBD and there was an opening for an assignment editor. Jonathan let Shannon know about the opening. She applied, got the job and the rest is history.